The China Photovoltaic Industry Association (CPIA) is calling on local solar power developers not to exacerbate the surging costs of raw materials by stockpiling polysilicon and other materials for manufacturing solar components.

Companies in the solar power industry, not only in China but all around the world, have been flagging soaring costs for raw materials since the start of this year. The rise in costs, after years of decline, threatens to delay solar installations worldwide.

“At present, some photovoltaic companies have drastically reduced operating rates, cut production or even suspended production,” CPIA said on Thursday, as carried by Reuters.

Some companies have reduced or suspended production, and some orders are not being met because of the surging costs and imbalances in the supply chain, the association added.

The Chinese industry body recommended that companies refrain from “excessive stockpiling” of polysilicon and silicon wafer products to ease the strain on the solar power supply chain.

The price of solar modules has jumped by 18% since the beginning of the year, BloombergNEF said last month. Polysilicon prices have surged to their highest in nearly a decade, according to data from PVInsights cited by Bloomberg.

“The disruption to solar hasn’t been this bad in more than a decade,” Jenny Chase, lead solar analyst at BloombergNEF, says, adding that solar power developers and governments should stop expecting solar projects to get much cheaper quickly.

New utility PV projects are becoming more expensive due to increasing costs for modules, shipping, and labor, Rystad Energy said in a report in April. 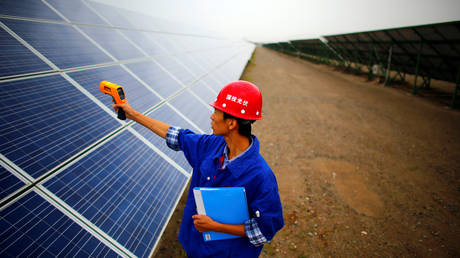