The Covid-19 pandemic has not stopped Alibaba from nearly doubling its previous high. According to the e-commerce giant, its gross merchandise value (GMV), a figure that reflects the total value of orders across its platforms, reached $74.1 billion.

Usually a 24-hour shopping bonanza, this year’s festival lasted for four days and had two sales windows – from November 1 to 3 and then on November 11 – while the pre-sales period was also extended. A similar strategy has been used by other retailers, including some in the US, due to a plunge in sales amid the coronavirus pandemic.

Alibaba did not reveal the numbers for each period, but it said the results of the pre-sales and first three days of sales “indicate that consumer spending continues to experience a strong rebound in China and that the demand for imported goods is higher than ever.”

Alibaba’s domestic rival, JD.com, also announced that it saw record sales this year amid the ongoing economic recovery. On the first official day of sales, the retailer’s turnover increased by nearly 90 percent year-on-year, while the transaction volume hit almost $41 billion over the 11 days of the shopping event.

Singles’ Day, also called Double 11 because it happens on November 11, is the Chinese version of America’s Black Friday. However, the event is much bigger in terms of the amount of sales, eclipsing Black Friday and Cyber Monday combined.

Despite mammoth sales, shares in both online giants plunged by as much as nine percent on Wednesday, before partly reversing the losses on Thursday. The drop came amid mounting regulatory concerns triggered by new draft rules aimed at curbing monopolistic behavior. While Chinese regulators did not point at any particular company, investors fear that the business of China’s top tech firms may be hurt by the new regulations. 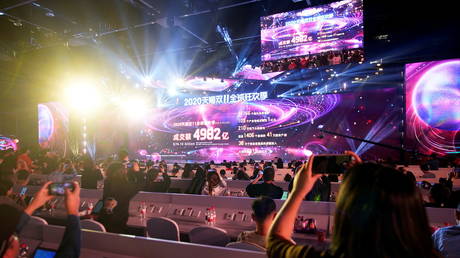