Pork prices in China dropped by 2.8 percent in October compared to a year ago, the National Bureau of Statistics said on Tuesday. It’s the first decrease since February 2019 – more than a year-and-a-half ago.

Prices doubled last fall due to the lingering impact of African swine fever, which was first detected in China in August 2018. The disease wiped out about half of the country’s pig population, creating a record shortage of pork in the world’s largest pork-consuming nation.

October’s decline in prices was due to an increase in the supply of live pigs, according to Bruce Pang, head of macro and strategy research at China Renaissance. He told CNBC that he expects further year-on-year declines in pork prices in the current quarter. Overall inflation in China as measured by the consumer price index is likely to decline, Pang said.

China’s pork supply is expected to recover further from the recent shortage. The national customs agency said last month that for the first three quarters of the year, imports of pork more than doubled from a year ago.

Beijing, however, plans to reduce China’s reliance on agriculture imports in the next five years, particularly from countries such as the US and Australia. According to data from the USDA Foreign Agricultural Service, imports will account for only about 11 percent of Chinese pork consumption this year. 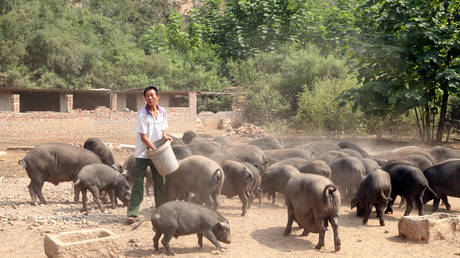 Who owns Pfizer and where is the c...