China’s economic recovery continued to gain momentum last month, with exports posting the strongest performance in more than a year and imports soaring at the fastest pace since the start of the coronavirus pandemic.

Customs data released on Tuesday shows that outbound shipments were in line with market expectations as they surged 9.9 percent last month from a year earlier. September marked the fourth consecutive month for China’s export growth, which was supported by the reopening of global economies as well as booming demand for medical devices and electronics.

Year-on-year imports returned to growth and jumped 13.2 percent in dollar terms last month, beating analysts’ expectations for a 0.3-0.4 percent increase. In August, inbound shipments contracted 2.1 percent and were also in negative territory during the previous month.

Imports were up partly because of increasing food purchases, including meat, grain, and soybeans, as China’s agricultural sector had suffered from flooding and bad weather conditions. The yuan’s recent appreciation could have also helped to boost imports.

“In coming months, we expect the export strength to persist and imports may also continue to expand on the back of continued recovery in domestic activity,” Goldman Sachs economists told clients in a note on Tuesday, as cited by media.

China’s foreign trade expanded by a total of 0.7 percent year-on-year in the first three quarters of 2020, with exports growing by 1.8 percent and imports falling by 0.6 percent in yuan-denominated terms, according to official customs data.

Statistics shows that China is accelerating imports from the US, which soared nearly by a quarter last month compared to a year earlier. This allowed the trade surplus with the US to narrow by over $3 billion in one month to reach $30.75 billion in September, but it was still nearly 19 percent up year-on-year. The numbers are being watched closely, as Beijing is expected to significantly increase purchases of American goods under its trade deal with Washington. However, there are concerns that the second largest economy won’t be able to hold its end of the bargain, leading to a further escalation of the US-China trade war. 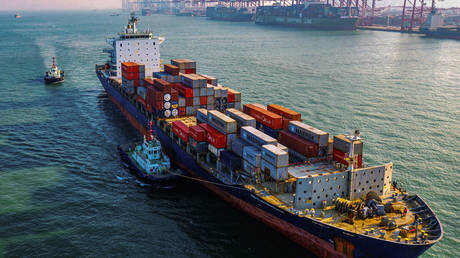 Saudi Arabia opens its market for...