China set to fall short on US energy purchases

China set to fall short on US energy purchases

China and the US agreed under phase-1 of the trade deal that the Asian nation would buy some $26 billion of US energy this year, but China is unlikely to meet that goal.

Even before the coronavirus pandemic upended all forecasts for global trade and energy demand, analysts had doubted that China would be able to fulfill its pledge in the phase-one trade deal with the United States to buy as much as $26 billion worth of American energy products this year. COVID-19 and the resulting plunge in oil and natural gas demand and prices have made China’s target to buy US energy products even more unachievable–perhaps nearly impossible to achieve–according to estimates for the first five months of 2020.

Today’s dramatically lower oil prices compared to January – when the phase-one trade deal was reached – mean that even if China were to significantly boost its import volumes of American oil, liquefied natural gas (LNG), coal, and refined petroleum products such as propane, their value in US dollars would still be lower than expected at the start of the year.

Analysts believe that China will likely fall short of its target for buying US energy products this year, while Republican lawmakers and US trade groups are urging the US Administration to prioritize energy products in trade negotiations and are calling on China to increase its purchases of American goods, including energy, to meet its target under the deal.

The phase-one agreement signed in January called for China to purchase billions of dollars’ worth of oil, coal, and LNG. Even before the pandemic, analysts had largely concurred that the Chinese promise to buy an additional $52.4 billion worth of US energy products in 2020 and 2021 on top of the 2017 levels of Chinese energy imports was most likely unachievable, even if China intended to fulfill all its pledges in the deal.

The additional $52.4 billion of energy products in 2020 and 2021 means that China must buy around $26 billion of those products this year.

According to estimates from the Peterson Institute for International Economics (PIIE), as of May 2020, China had bought just $2 billion worth of US energy products out of the massive $26.1-billion goal.

Through the first five months of 2020, China’s purchases of US energy products were only at 18 percent of their year-to-date targets, says PIIE senior fellow Chad Bown.

China is doing better in purchases of agricultural and manufactured goods, although they are still trending below target as of May, nearly halfway through this year, the PIIE estimates show.

Agriculture may still catch up because of the seasonal character of crops in the fall, but when it comes to the energy products, the target currently looks impossible to meet.

To reach $26 billion purchases of US energy products, China must buy more than $3 billion every month until the end of the year, Josh Zumbrun of The Wall Street Journal estimates. This would compare to just $2 billion energy products China purchased for the entire period between January and May.

US Trade Representative Robert Lighthizer has said that the trade data does not yet reflect bilateral agreements for purchases that have yet to be fulfilled.

Still, the US Chamber of Commerce and more than 40 industry groups this week urged Lighthizer, US Treasury Secretary Steven Mnuchin, and Chinese Vice Premier Liu He to work for a significant increase in Chinese purchases of US goods, including energy, as part of the phase-one deal.

Last month, a Republican lawmaker from West Texas, Jodey Arrington, and 40 of his Republican colleagues sent a letter to Lighthizer calling on him to prioritize oil and gas in negotiations with China.

“Specifically, USTR should urge China to buy US crude oil rather than purchasing more crude from countries known for distorting the global oil market,” the Members of Congress wrote in the letter, referring to Russia and Saudi Arabia.

“Because China was the first country to reopen its economy following the outbreak, consumer demand in China should soon return to pre-coronavirus levels. That demand should be met with American oil and natural gas, and we encourage USTR to make this a priority throughout Phase One implementation discussions,” they said.

According to the American Petroleum Institute (API), the phase-one trade deal is “an opportunity to strengthen America’s energy security and provide for much needed balance to the global markets,” API President & CEO Michael Sommers said in a letter to Lighthizer, Energy Secretary Dan Brouillette, and Commerce Secretary Wilbur Ross at the end of April.

“China will need access to energy in the near-term and the United States is well-positioned to provide for this need,” API’s Sommers said. 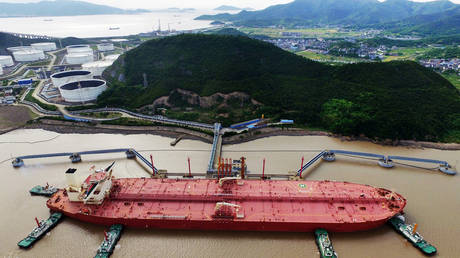 Coronavirus droplets can hang in t...