China has suspended shipments of poultry products from a plant owned by Arkansas-based meat giant Tyson Foods after hundreds of workers tested positive for Covid-19.

All products sent from the affected plant, including those that have recently arrived at Chinese ports and are still in transit, will be temporarily detained, China’s General Administration of Customs said on its website. The volume of meat affected by the decision is unclear.

Chinese customs said the export suspension came after “a cluster of coronavirus infections were confirmed among workers” at the Tyson Foods factory.

Last week, the US corporation revealed the results of large-scale coronavirus testing at its facilities in Benton and Washington Counties. More than 480 employees, or 13 percent of the workers, were found infected with the virus, with Tyson Foods saying that most of them showed no Covid-19 symptoms.

While the company told the media that it was looking into Beijing’s decision, it stressed that there is no evidence that the virus can be transmitted via food. It also noted that it is working closely with the US food safety authorities “to ensure that we produce all of our food in full compliance with government safety requirements.”

Beijing has been on high alert since a new outbreak occurred at the Xinfadi wholesale market last week. China said it had found the trading sections for meat and seafood in the market to be severely contaminated with the coronavirus. The new outbreak has been blamed on imported salmon, but this has not been confirmed. Others say that infected people could have entered the market and sneezed or coughed near the products.

Imports of US poultry to China have surged since Beijing lifted an almost five-year ban on shipments in November 2019. The previous ban was imposed after the US was hit by an outbreak of the avian flu.

Depending on how long the suspension of poultry shipments lasts, it may have an impact on the US-China trade deal, under which Beijing has to significantly boost purchases of US farm products among other things. It comes in addition to earlier concerns that the pandemic may derail China’s trade deal promises due to supply chain disruptions and its overall effect on the country’s economy. 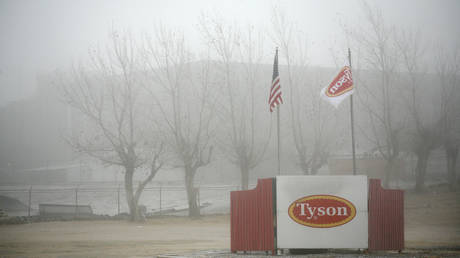