The last nine impoverished counties in China’s southwestern province of Guizhou were removed from the country’s poverty list on Monday. The nation has thus ended absolute poverty one month before its self-imposed deadline.

Back in 2012, the Communist Party of China set a goal to end domestic poverty by the end of 2020. China’s poverty line benchmark stands at 2,300 yuan per year at 2010 prices, or a little less than a dollar a day.

In 2013, one in every three counties in China was labeled “poverty-stricken.” The country had 832 severely impoverished counties then, with over 80 million people affected. Only nine provincial-level areas, including Beijing and Shanghai were free of poor counties.

According to data from China’s National Bureau of Statistics, in the past seven years, an average of 10 million people have been lifted out of penury in China every year. The population living in absolute poverty dropped from 98.99 million at the end of 2012 to 5.51 million by late 2019. Over the same period, the number of impoverished counties decreased from 832 to 52. 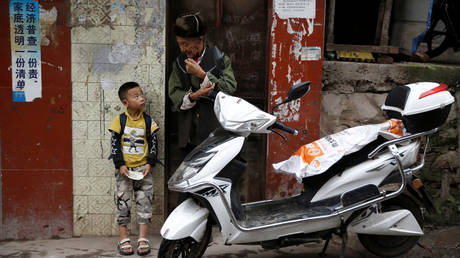 Boris Johnson says MPs should NOT...