China accuses India of discriminatory trade, New Delhi says Beijing should reflect on its own transparency

China accuses India of discriminatory trade, New Delhi says Beijing should reflect on its own transparency

Chinese authorities have accused India of discriminatory and restrictive trade measures, pointing to the ban on Chinese apps and curbs on foreign direct investment.

At a recent meeting at the World Trade Organization (WTO), Chinese officials said the measures undermine the transparency, stability, and predictability of the Indian market.

According to the complaint, India has banned the use of 234 mobile apps, most of which were developed and operated by Chinese internet companies. The banned apps cover many service sectors such as computer-related services, telecommunications, audio-visual services, and financial services where India has made specific commitments under the General Agreement on Trade in Services (GATS).

“China expressed its concerns about the recent restrictions by the US and India on its mobile applications such as TikTok and WeChat,” said an unnamed Geneva-based official as quoted by the Economic Times.

Indian officials argued that the measures were fully compliant with GATS commitments and in line with the democratic rights of its citizens to privacy. They said China has “one of the most restrictive digital economy frameworks in the world” and should reflect on its own transparency record first and its long-standing reluctance to fully open up to foreign trading services. “All software suppliers have to comply with our domestic regulations,” another official said.

Relations between the two nations have worsened since a deadly clash in June between Indian and Chinese soldiers along a disputed border in the Himalayas in which 20 Indian soldiers were killed. New Delhi has since imposed 100 percent physical checks on shipments from China, which is its second-biggest trading partner. Trade turnover between the two countries was worth $87 billion in the fiscal year ending March 2019, with a trade deficit of $53.57 billion in China’s favor, the widest India has with any country. 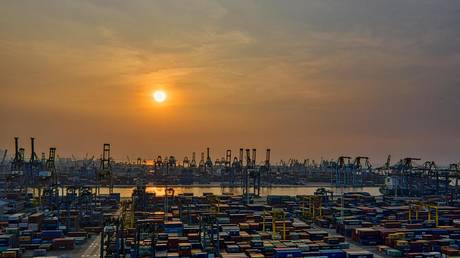