Berlin has no intention of changing its stance on the Russia-developed Nord Stream 2 pipeline as the Trump administration ratcheted up pressure against the project, threatening investors with sanctions.

“We have taken into account the US secretary of state’s statement. The German government’s position on Nord Stream 2 has been expressed many times and remains unchanged,” a government representative told TASS on Thursday.

The statement came less than 24 hours after US Secretary of State Mike Pompeo said that those companies involved in the project should “get out” or face consequences. At the same time, the State Department announced that it had updated the public guidance for Section 232 of the Countering America’s Adversaries Through Sanctions Act (CAATSA).

Now the legislation, initially designed to punish Moscow for alleged “malign behavior,” includes investments or other activities linked to Nord Stream 2 and the second string of TurkStream natural gas pipelines. It also allows sanctions to be imposed on pipelaying vessels and related engineering service providers participating in the energy projects.

The German Eastern Business Association said that the European Union has no choice but to respond to this “attempted extortion.” Chairman of the association Oliver Hermes noted that possible sanctions put billions of European investments at risk and could result in rising energy costs for European consumers. He added that the EU needs an effective mechanism to shield local companies.

Moscow earlier called Washington’s threat another example of US political pressure for the sake of unfair competition. According to President Putin’s spokesman Dmitry Peskov, the US simply wants to force Europeans to buy its more expensive gas. The US has been actively lobbying EU states to switch to its liquefied natural gas (LNG) instead of Russian blue fuel.

The Nord Stream 2 project is 90 percent complete. After its launch, scheduled for the end of the year, the underwater pipeline will supply Europe with up to 55 billion cubic meters (bcm) of natural gas per year, on top of the 55 bcm annually supplied through Nord Stream 1. 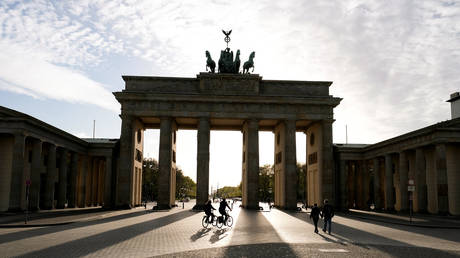