Fast containment of the Covid-19 outbreak has given Asian countries an advantage over other economies, paving the way for a faster recovery, analysts at Goldman Sachs believe.

“We think Asia’s really the best positioned of the major regions right now, given the good control of the virus in most of the region outside of India and some parts of Southeast Asia,” Andrew Tilton, chief Asia economist at the investment bank, said as cited by CNBC on Monday.

Europe is currently facing a new wave of coronavirus infections, with more and more cities enforcing tougher restrictions, which may hamper their recovery after previous lockdowns. The US is also seeing an increase in average daily cases.

Meanwhile official data from China, one of the main economic drivers of the Asia region, shows the worst impact of coronavirus appears to be over. The country has been reporting only a dozen to two dozen newly confirmed cases every day for the past few weeks, compared to the thousands of daily infections still being reported in the US.

“I think, given the good control of domestic transmission of the virus in China, we are [going to be] seeing services activity come back there as well,” Tilton told CNBC.

That said, consumer spending in the world’s second-largest economy is recovering less quickly than the government had expected. Tourist expenditure in the first half of the “golden week” national holiday plunged by nearly a third from that during the same period in 2019. This could pose a challenge to Beijing’s attempts at boosting domestic spending. Statistics show that, in August, retail sales finally increased by 0.5 percent compared to the previous year, but they were still down over eight percent for the first half of 2020.

The Chinese economy still managed to post positive growth in the last quarter, however, escaping recession, and current economic data points at further recovery overall. China economists from Nomura expect the nation’s GDP to grow 5.2 percent in the third quarter compared to a year ago.

According to global market strategist for Asia Pacific at Invesco David Chao, China has shown a continued V-shaped rebound from the pandemic, and this gives a boost to its neighbors. “China’s recovery will lift the surrounding Asian economies to a certain extent,” he told CNBC earlier this week. 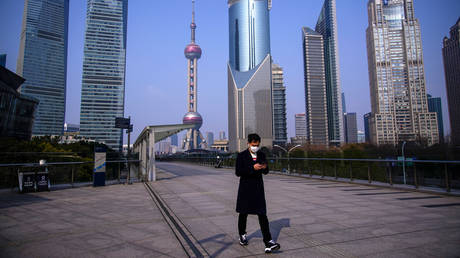