The plot has thickened in the legal battle between Apple and Epic Games, as the iPhone maker accused the developers behind Fortnite of deliberately hurting customers to profit from their own payment system within the App Store.

Apple urged a judge to shoot down Epic Games’ request to issue an order to reinstate Fortnite in the App Store while the legal battle rages on. The company maintains that Epic had willingly accepted the App Store’s terms of use and was well aware of the rules when it grossly breached the existing agreement.

“Epic knew full well that, in circumventing Apple’s processes and breaching its contracts, it was putting its entire relationship with Apple – including its Unreal Engine and other projects – at serious risk,” Apple said in its filing.

Epic made the calculated decision to breach anyway, and then run to this Court to argue that its customers were being damaged.

The row between the two tech companies erupted last week, when Apple abruptly removed Epic’s hugely popular battle royale game Fortnite from its store. The move was triggered by an update that would allow users to purchase in-game items directly from Epic – circumventing a mandatory 30-percent App Store fee.

The Fortnite developers then immediately accused Apple of breaching antitrust laws, and filed a lawsuit, claiming the tech giant is “keeping prices high so they can collect 30 percent of your payments.” Epic also launched a #FreeFortnite social media and PR campaign, parodying Apple’s famous ‘1984’ ad.

Apple has become what it once railed against: the behemoth seeking to control markets, block competition, and stifle innovation.

On the very same day, Epic Games managed to get entangled into a separate legal battle against another tech behemoth – Goggle. Fortnite was removed from the Play Store shortly after its disappearance from the Apple platform. Google said the game was no longer “available on Play because it violates our policies,” which it argued were “fair to developers.”

The row over the payment mechanism is not Epic’s first with either company. In 2018, it removed Fortnite from Google Play to distribute the game directly, citing the 30 percent fee. The company eventually brought the game back to the platform some 18 months later, though still maintained that Google’s policies put it at a “disadvantage.”

Epic has also recently joined a number of other app developers – including Spotify, Tinder and Hinge – in challenging fees on the App Store, with CEO Tim Sweeney calling on Apple to allow “all iOS developers” to be “free to process payments directly.” 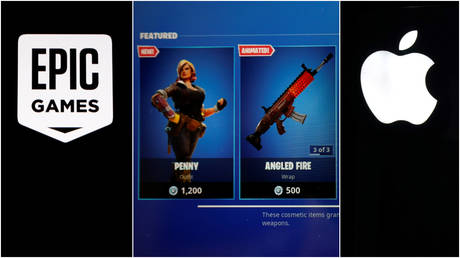 NHL announcer SLAMMED for use of &...