Another Iranian vessel carrying supplies is set to dock in Venezuela

Another Iranian vessel carrying supplies is set to dock in Venezuela

Iran has sent its sixth cargo ship to the sanctions-hit South American nation, due to reach its destination on Sunday. Unlike previous vessels, which were carrying gasoline, this one is set to deliver food to Venezuela.

The ‘Golsan’ is set to moor at one of Venezuela’s ports on June 21, the Iranian Embassy in Caracas earlier announced on its Twitter account. The food supplies it carries are meant for the opening of the first Iranian supermarket in the Bolivarian Republic, and are another sign of success in relations between the two nations, the diplomatic mission added.

According to the most recent data on the Marine Traffic website, the Iranian-flagged ship was sailing at 14.5 knots past Venezuela’s Isla de Margarita in the Caribbean Sea.

The arrival of new supplies from Tehran comes just three weeks after a five-tanker Iranian flotilla delivered 1.5 million barrels of gasoline to Venezuela, which is struggling from a severe lack of fuel amid sweeping US sanctions. As the last tanker arrived in the country on June 1, Tehran assured that it can dispatch more ships if Caracas asks for it.

The Iranian fuel shipments came despite the Trump administration working hard to thwart the mission. The Iranian envoy to the United Nations (UN) has claimed that the vessels are facing “the threat of imminent use of military force” by the US. Washington, however, did not explicitly say that it wanted to attack the flotilla, but warned that any nations attempting to assist the Iranian ships would face consequences.

Iran and Venezuela have both been hit by sweeping US sanctions, including restrictions targeting their energy sectors. As Washington is openly seeking to oust Venezuelan President Nicolas Maduro and offers support to self-proclaimed ‘interim president’ Juan Guaido, it slapped Venezuela’s state oil company PDVSA with sanctions, bringing the nation’s oil exports – the main source of budget revenue – to multi-year lows. Meanwhile oil production in the country, which has the world’s largest reserves, has plunged to a 75-year low, according to Bloomberg citing a PDVSA document. 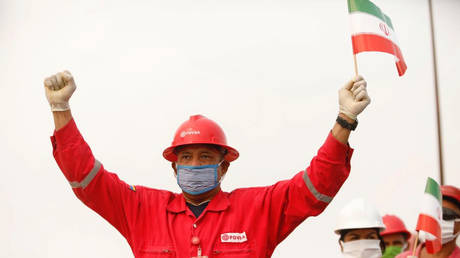 The newest battlefield in the Euro...