An offer you can’t refuse? Trump slaps France with 25% tariffs, but gives it 180 days to ‘rethink’ taxing Apple, Google & others

An offer you can’t refuse? Trump slaps France with 25% tariffs, but gives it 180 days to ‘rethink’ taxing Apple, Google & others

US President Donald Trump has imposed a 25 percent import duty on French goods in an effort to scuttle the country’s digital services tax – making it clear that Paris has several months to rethink cutting into Big Tech’s profits.

The tariff would affect some $1.3 billion worth of imported French goods like handbags and cosmetics, the US Trade Representative’s office revealed on Friday. However, France has a full 180 days to “resolve the issue,” including through multilateral fora like the Organization for Economic Cooperation and Development.

The Trump administration has been threatening Paris with fiscal retaliation for months over its digital services tax – ever since France floated the idea of taxing some of the US’ most profitable corporations. While the ultimate value of the products affected by Friday’s tariff is significantly less than the $2.4 billion in goods the administration had initially threatened in January, which included iconic French products such as cheese and champagne, it runs contrary to a reported promise between Trump and French President Emmanuel Macron to postpone any potential trade war until the end of 2020.

Trump has repeatedly accused the French of “unfairly” targeting US tech firms, which include some of the wealthiest companies on the planet – trillion-dollar firms like Google parent Alphabet, Amazon, and Apple. The French tax is intended to compensate for tech firms’ propensity for setting up their corporate headquarters in countries where they pay hardly any corporate taxes while generating massive revenues in the French market. It is expected to supply some half a billion euros annually – if it’s allowed to take effect, that is.

The 3 percent levy will affect about 30 big tech firms, but only applies to corporations that make more than €750 million annually off “digital activities,” with at least €25 million of that coming from France.

It’s clear why Washington doesn’t want France to move forward with the tech tax, given that several other countries, from the UK to Italy, Turkey, and Russia, are mulling similar measures. The EU as well has attempted to pass bloc-wide efforts to tax Big Tech, though none have yet been successful; however, the body floated the idea again in May as a possible way to close the budget shortfalls created by the economic crash that accompanied the Covid-19 pandemic.

These nations are likely watching France anxiously to see what kind of punishment the US metes out in return for what would be an unprecedented attempt at reining in those American firms with more resources and power than most of the world’s countries. 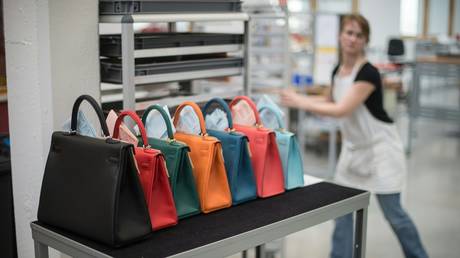 ‘Slap in the face’: Protesters ral...