US airlines are preparing to lay off tens of thousands of employees unless they get additional federal aid. The industry has been struggling to stay afloat amid an unprecedented collapse in air travel due to the Covid pandemic.

American Airlines CEO Doug Parker said late Wednesday that the carrier has no choice but to cut 19,000 jobs after attempts to get more federal money failed. The CEO of United Airlines, Scott Kirby, said the decision to cut 13,000 jobs marked “a very sad day for all of us here at United.”

Earlier in the day, Parker told CNN he still hoped that the job cuts might be avoided if the airline saw signs that Congress and Treasury Secretary Steven Mnuchin would be able to reach an agreement.

“Unfortunately, there is no guarantee that any of these efforts will come to fruition,” Parker wrote in a memo to staff. Both Parker and Kirby suggested they could reverse course and quickly rehire employees if a deal is reached in the coming days, though. “We implore our elected leaders to reach a compromise, get a deal done now, and save jobs,” Kirby wrote to employees.

Congressional Democrats have proposed a $2.2 trillion package that would include $25 billion in aid for the nation’s airlines. However, Mnuchin has ruled out the likelihood of a stand-alone bill providing only airline aid, saying: “I am hopeful we can come to an understanding and if we do, that … the airlines will postpone their actions.”

In addition to the job losses at American and United, some 17,000 other employees throughout the US airline industry have been notified that their roles are at risk. As many as 50,000 jobs are at stake, White House Chief of Staff Mark Meadows said earlier this month.

The layoffs would add to job losses that already total 150,000 at the nation’s four largest carriers, based on employees who have left voluntarily or have taken temporary leave. Seven US airlines, including American and United, are getting ready to accept another round of loans that was also approved earlier this year. That aid, however, does not include a prohibition on cutting jobs.

Every US airline has lost money in the first half of this year, with American Airlines losing $5 billion and United down $3.3 billion. 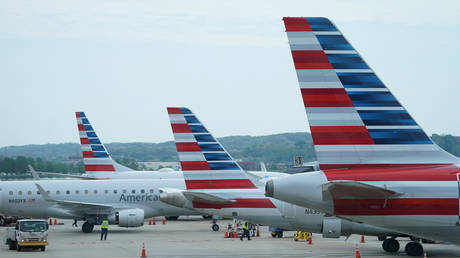