The volume of cargo moving through the Northern Sea Route (NSR) is expected to increase to 80 million tons in the next three years, President Vladimir Putin said at the Eastern Economic Forum on Tuesday.

“In 1986, the Soviet Union had the largest traffic volume along the NSR,” Putin said, adding that shipments at the time totaled 7.3 million tons, and that by 2020 they amounted to 33 million tons.

“Shipping goods via the Arctic sea route significantly reduces their price for the end consumer. This is the whole point,” Putin said, highlighting that the transport corridor has attracted the attention of many countries.

The route runs along the Russian Arctic coast and Siberia, from the Kara Sea east of Novaya Zemlya to the Bering Strait. The lane falls inside Russia’s exclusive economic zone in the Arctic region. The 5,500-kilometer NSR is one of three transportation routes linking Russia’s Far East with the European part of the country.

The Arctic sea route is currently the shortest passage between Europe and Asia. It is usually closed for several months due to the thick ice, but the fleet of new icebreaker escorts is expected to solve the problem of navigating the icy waters all year round. 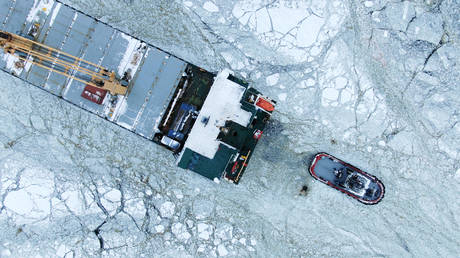 India wants Russia to be major...

India faces a power crisis as...

India wants Russia to be major importer of Darjeeling tea, like it was back in the USSR